Why I Wrote The Navigator: Develop Founder Skills to Lead Your Startup Successfully

Time and again, I’ve witnessed first-time founders fail not because they didn’t have a great product idea. Some did. There was a founder-CTO who developed a software that was the precursor to Google Street View. Another founder came up with a community-building platform called Circles, a few years before Google added Google+ to its product portfolio. A third founder developed a service that delivered private and trackable messages.

These entrepreneurs failed because they had spent most of their time in the Product room and missed the big picture: a successful startup operation comprises many components that need to synchronize and move forward as one engine.

Most first-time founders employ the conventional product-centric startup approach, placing most if not all their efforts and resources on their product idea. They believe that if they can build a prototype or even a complete product (whether this is a physical product, a service, or a software) and show that they can sell, scale and raise money, they’re on their way to entrepreneurial success.

They’re either unaware of or choose to delay the need to create a structure and processes to support their product and operation through their entire entrepreneurial journey. By the time they decide to focus on infrastructure building, they have to backtrack to incorporate all kinds of data and knowledge into their execution plans.

More important, product-centric founders overlook the need to develop their founder role to lead and build not just their product team but their entire company successfully. Most new entrepreneurs don’t know the questions to ask and don’t perform self-analysis to determine their own competency for the founder role. Many are insecure about taking the helm so they have this default plan to improvise in their founder/CEO/President role until they can afford to hire a qualified individual to take charge. They often believe that they are smart and can figure things out as they move along, but the startup environment is not a dress rehearsal; it can be very unforgiving.

The one major difference and advantage that successful serial entrepreneurs have over first-timers is experience: seasoned founders know how to take short-cuts and be effective. For new entrepreneurs who decide to wing it, it’s like taking command of a vessel and leading a crew without having studied seamanship and planning resources for the long journey.

After one of my startups that I was advising failed in spite of possessing many winning attributes, I took time off to reflect and review my experiences in the trenches with founders and co-founders. I decided to share my insights to help new entrepreneurs prepare well for their founder role and avoid many common missteps committed by product-centric entrepreneurs.

The Navigator employs the metaphor of an entrepreneurial journey as a sea voyage with the founder at the helm as skipper. The book reflects my belief that a new entrepreneur needs to allocate time to take stock of where she’s been; what qualities, skills and resources she’s bringing onboard as captain of her own startup vessel; and what she needs to cultivate and prepare well for the journey.

A product idea may evolve or change completely over time. The one constant in each venture is the founder, who shoulders immense responsibility and wields great influence over outcomes. The Navigator offers an integrated process to help new founders train and develop competency prior to launching their venture. Proper planning prevents poor performance. 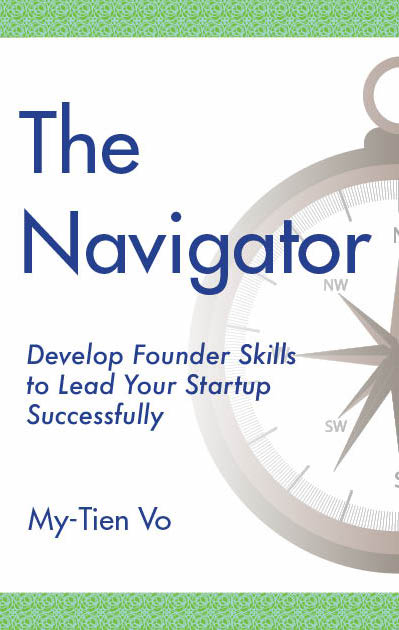 My-Tien Vo (Brown ’87) is a San Francisco-based founder coach, startup strategist, brand strategist, and author of The Navigator: Develop Founder Skills to Lead Your Startup Successfully and The Founder’s Manifest: For Anyone Starting a New Business