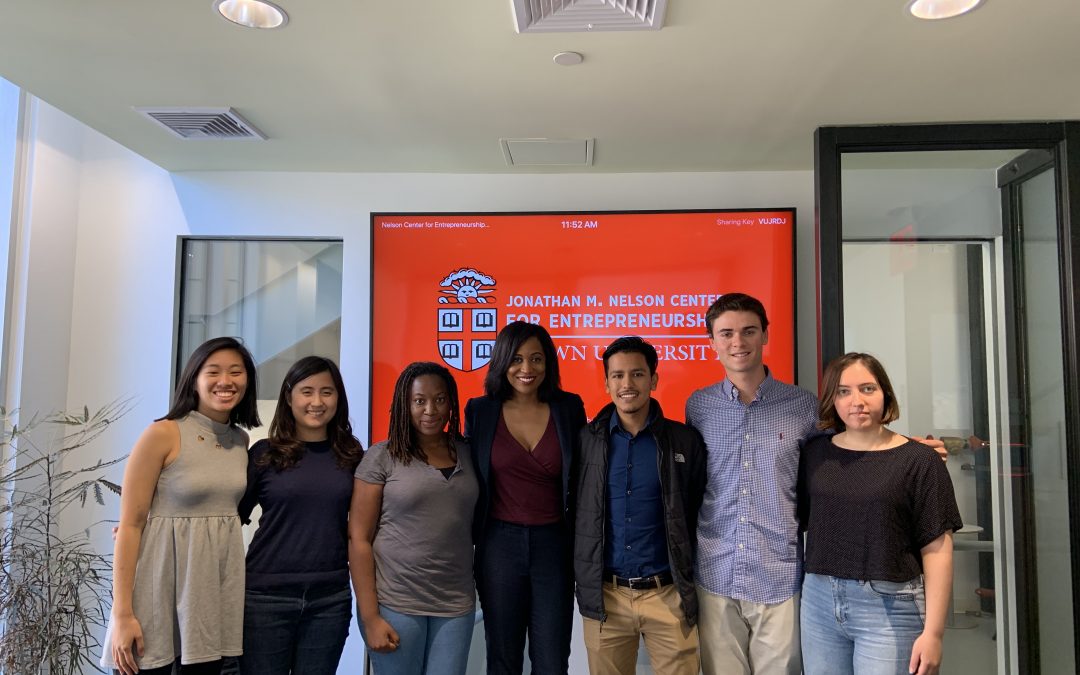 On September 27, 2019, The Nelson Center for Entrepreneurship and Brown EP proudly hosted Riche Holmes Grant ‘99 (pictured above center) for a roundtable discussion as part of the Roundtable Discussion Series moderated by Chuck Isgar ’21 (center in, from the right). In the first roundtable hosted in the new Nelson Center for Entrepreneurship Building on Thayer Street, Grant discussed her experiences and key takeaways from building various entrepreneurial ventures, including BambiniWare and “The Riche Life” web series.

From Columbia Law School to starting an education venture

Following her time at Brown, Grant attended Columbia Law School. She came to the realization that the traditional corporate lawyer track might not be right for her after not receiving an offer from her summer firm to return after graduation. As a result, Grant was pointed in another direction: entrepreneurship. In the grand scheme of things, Grant recognizes that this worked out great as it not only launched her on an exciting path, but also allowed her to establish her resilience of dealing with rejection. In the discussion, Grant stressed the importance of fighting through failure.

Back when Grant was doing test prep while waiting for her bar exam results, she realized it could be done better. She also saw that test prep players, such as Kaplan, weren’t competing in markets such as her hometown of Prince George’s County, Maryland–the most affluent African-American county in the country. There was an opportunity in Grant’s head. In 2003, Grant founded Innovative Study Techniques, an education company focused on test preparation and education counseling. This venture was just the start of Grant’s entrepreneurial career.

Understanding your strengths and identifying who can help you 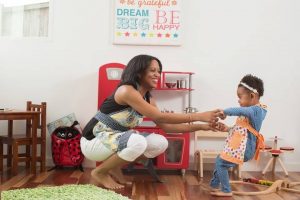 In 2013, Grant launched BambiniWare, an innovative baby and mommy accessories brand with patented designs and fun and unique prints, inspired by her experience as a new mom. When developing BambiniWare, Grant was aware that she didn’t know everything that it would take to grow the business. Along these lines, Grant shared with the discussion participants the importance of finding experts and making them your mentors.

As Grant worked on BambiniWare, she learned a major lesson: whoever you go into business with, make sure they are committed. Along these lines, Grant advised the participants to not be afraid to start as a solo founder.

Within one year of launching BambiniWare, Grant had established a partnership with Martha Stewart. Since 2015, she has been a writer for MarthaStewart.com. In addition, she is a Culinary Expert for Williams Sonoma, Inc., writes for Subaru, and serves as a Digital Ambassador for St. Jude Children’s Research Hospital – ALSAC.

Starting “The Riche Life:” a lesson in the importance of listening to those around you

At Grant’s core has always been the desire to help people. Over time, Grant heard from multiple people that they thought she should consider sharing some of her thoughts and advice on a video platform. Along these lines, Grant shared an important lesson for the aspiring entrepreneurs in the room: when multiple people tell you the same thing, you need to start thinking about it.

Without even knowing where the record button was on the camera, Grant began her series “The Riche Life.” As usual, Grant was willing to seek advice along the way. Grant shared some advice that was given and believes is important to keep in mind when establishing a media platform: don’t worry about your early numbers, likes, etc. Rather, Grant stressed the importance of creating great content, a principle that has driven her work with “The Riche Life.”

Given that she is not just the show’s host, but also her own makeup artist, production assistant, and more, she has been very careful about the message she is sending. Grant has has placed an emphasis on exploring what makes a person’s life rich — not just money, but also happiness.

Utilizing your resources and advice for the journey ahead

You know the phrase “how can I help you” that you might hear from mentors, peers, and others? Grant has heard it many times before, and you might have also. She encourages people to take advantage of this offer.

Grant remarked that at the end of the day, no matter how well-known someone is, people are just people. There’s no harm in asking for help; the worst-case scenario is someone says “no.”

In the spirit of Grant’s emphasis on continued learning and mentorship, she recommended that you find the best people in your industry and see how you can learn from them, whether through books or other means.

Grant provided many pieces of advice for participants who want to pursue entrepreneurial ventures: you have to have tough skin as most days aren’t rosy and you have to be prepared for bumps in the road.

Another takeaway really stands out: if you’re not afraid, it’s not enough of a challenge for you.