Congratulations to the 2021 Hazeltine Mentoring in Entrepreneurship Award Recipients 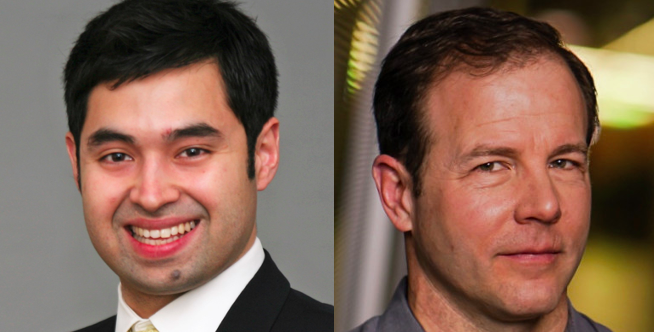 Professor Barrett Hazeltine has been mentoring and inspiring Brown University students for decades. In honor of his dedication to student mentoring, and in particular, his mentorship of aspiring entrepreneurs, a group of alumni came together to start the Hazeltine Mentoring in Entrepreneurship Award. We are excited to announce that this year’s recipients are Hamzah Ansari PRIME ‘09 (left) and Troy Henikoff ‘86 (right).

Hamzah Ansari has been a tremendous resource to the Brown and local entrepreneurial community for years and in particular, the Nelson Center since we opened in fall 2016. It is common to find him mentoring student startups in various Nelson Center and Engineering programs, sponsoring independent studies for students focused on entrepreneurship, and often being asked to judge pitch competitions. He consistently raises his hand to mentor students. Hamzah currently teaches the technology commercialization and entrepreneurship course in the PRIME Masters Program, and students in his class consistently comment on his dedication to them and their venture ideas. This was especially true during the last summer when he served as our inaugural Entrepreneur in Residence for the 2020 Breakthrough Lab (B-Lab) cohort, and met weekly with four venture teams, helping them all accelerate their ideas and take them to the next level.

Troy Henikoff has also been affiliated with the Nelson Center since the very beginning. First through mentoring students in office hours, speaking on campus back in 2016, and getting involved in the early stages of Van Wickle Ventures, the student-run venture fund, supported by the Nelson Center. From day one he was a teacher and mentor for the founding group of students as they launched the fund, and remains committed to working with the group as an Investment Committee Member.

They have both been generous with their time mentoring Brown students and have been instrumental in their success.

Join us on Thursday, May 6 at 4:00 pm ET for a virtual happy hour to celebrate the recipients of the award, as well as get a chance to say hello to Professor Hazeltine. We invite you to join us and raise a glass from your home to honor the winners. RSVP here. A Zoom link will be sent to you.

Read more about the recipients below.

TROY HENIKOFF ‘86 Troy is Managing Director of MATH Venture Partners. He was a Co-founder of Excelerate Labs, which became Techstars Chicago in 2013 where he was Managing Director through 2016. Troy also helps manage the FireStarter Fund, teaches Entrepreneurship at Northwestern University’s Kellogg School of Business, and is on the board of the Chicago-land Entrepreneurial Center. Prior to Techstars Chicago, Troy was the CEO of OneWed.com, President of Amacai, and co-founder and CEO of SurePayroll.com. Troy built the technology for Jellyvision (creators of “You Don’t Know Jack!”), was the President of Systemetrics, and his first company was Specialized Systems and Software. Troy has an undergraduate degree in Engineering from Brown University and a Masters Degree in Project Management from Northwestern.

HAMZAH ANSARI ’09 Hamzah is a Lecturer in Innovation and Entrepreneurship at Brown, as well as the Entrepreneur-in-Residence at the School of Engineering. In these roles, Hamzah mentors, coaches, and advises student and alumni ventures on topics such as strategy and due diligence; as well as on the development of soft skills such as effective communication, critical thinking, and professional networking. He also teaches highly intensive and experiential undergraduate and graduate-level classes on Technology Commercialization and Entrepreneurship within the BEO and PRIME programs, where students use lean venturing methods to take their business ideas from drawing board to marketplace. Finally, he also served as a B-Lab Entrepreneur-in-Residence at the Nelson Center, this past summer in 2020.