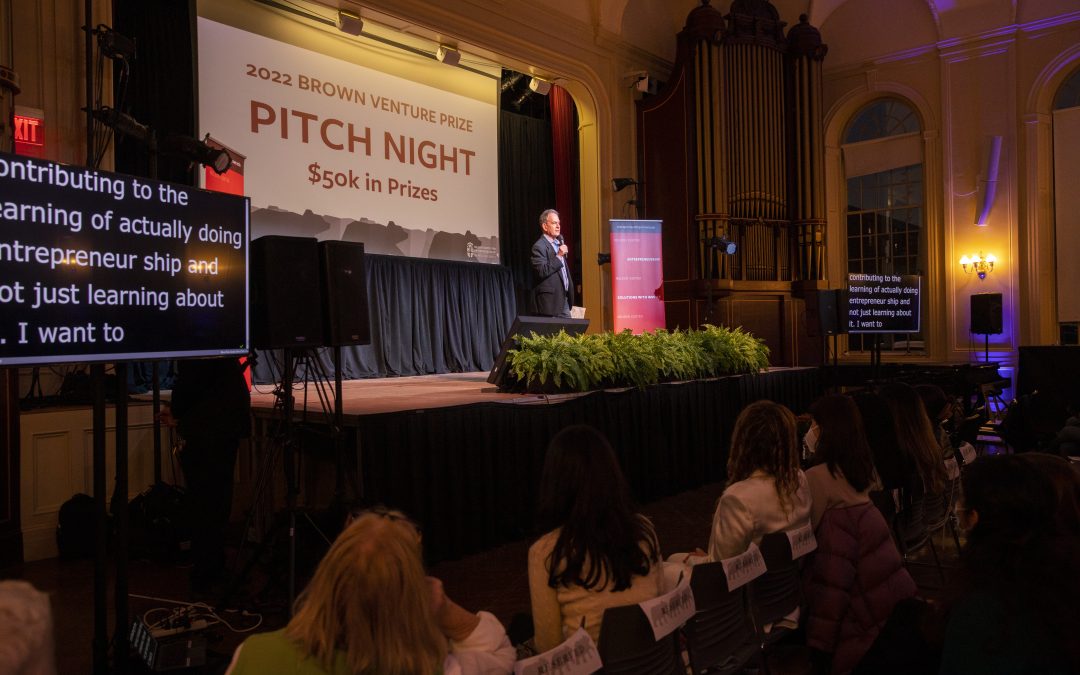 After two years online, the fifth annual Brown Venture Prize Pitch Night returned in full celebration for an in-person event held in Alumnae Hall. The Brown Venture Prize, designed to empower the most advanced entrepreneurial ventures by Brown students, received overwhelming support this year with a live audience of 250+ people that was standing room only. An electric atmosphere filled the room as each venture took the stage to pitch ventures focused on solving some of the world’s most difficult problems.

Danny Warshay ‘87, Executive Director of the Nelson Center, served as the official MC for the night, giving a warm welcome to the crowd before kicking off the event. The top seven ventures pitching this year were: aloud, AtomICs, Cinemates, COmmunity ADherence (COAD), Dream!N, Kerja.io, and Pointz Mobility, Inc. After each pitch, the founders answered questions from a lineup of impressive judges, which included Ben Chesler ‘15, Mary Pan ‘99, Sadie Kurzban ‘12, Melanie Whelan ‘99, Michael Song ‘89, Jessica Murphy ‘00, Richard Katzman ‘78, and Lisa Gelobter ‘91. 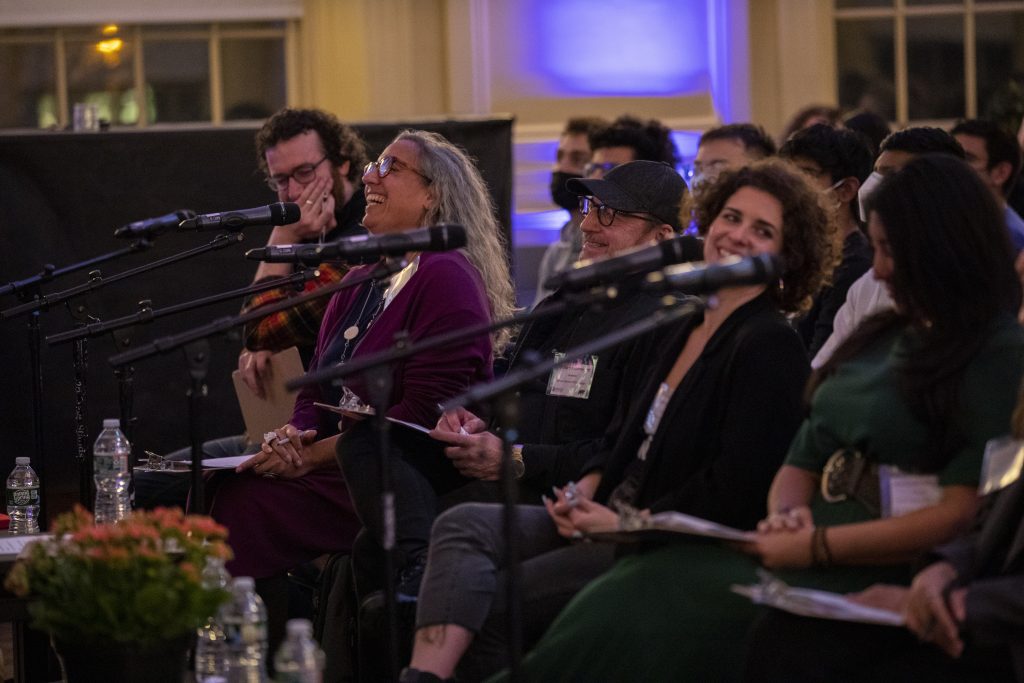 The companies the judges have built or led include tEQuitable, SoulCycle, TrueFit, Imperfect Foods, and 305 Fitness. They are creators, innovators, and investors from Certeris Capital, Madison Park Ventures, and Rustic Canyon Partners. For some, the event also served as a reunion as Danny pointed out that several of the judges, specifically Ben and Sadie, had once been students in his class ENGN 1010, The Entrepreneurial Process. Sadie wrote her business plan in Danny’s class and launched 305 Fitness on campus. Sadie then scaled 305 Fitness to major cities all over the country and pivoted during the pandemic to bring her classes virtually into people’s homes. Likewise, Ben took Danny’s course and developed Imperfect Foods,  scaling the business nationwide, raising over $100mm, and saving 139 million pounds of food from going to waste. 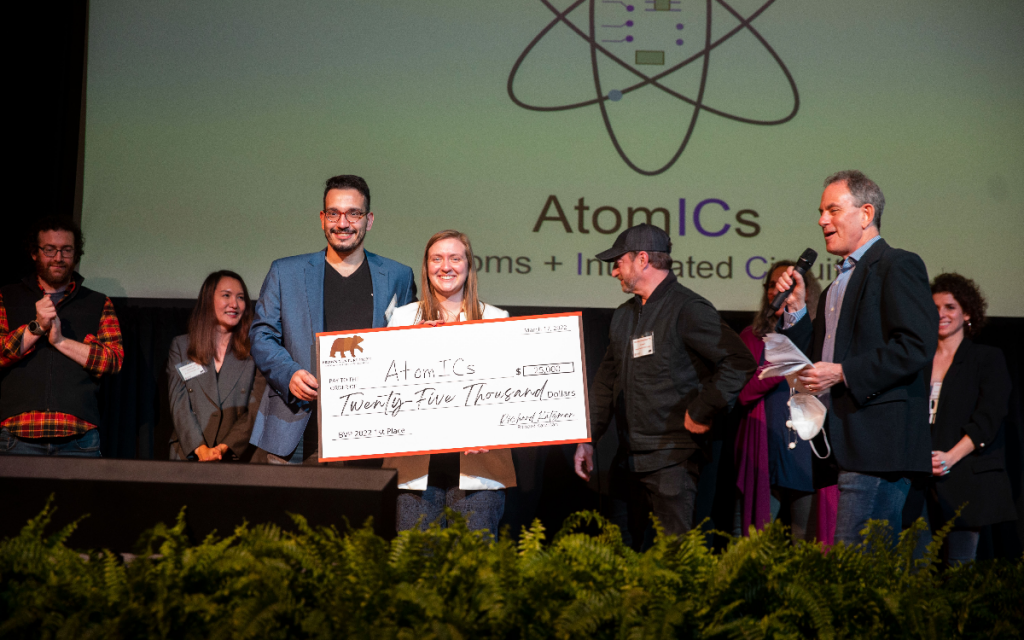 Every venture was met with a roar of applause from the audience after giving a clear, energetic, and engaging four-minute pitch for their idea. The judges had a difficult time deciding the top three winners. In the end, AtomICs, founded by Selahaddin Gumus PhD ’24, Dana Biechele-Speziale PhD ’24, Brenda Rubenstein, and Jacob Rosenstein, won 1st Place with $25,000; Dream!n, founded by Yuhan Zhang ’24, Yifei Wang ’23, Hanxuan Zhang, and Chufan Wu, won 2nd Place with $15,000; and COAD, founded by Bevan Bsharah ’22, Rose Engler ’22, Loan Anh Tran ’22, Sunny Li ’23, and Nicholas Simone ’21 took 3rd Place with $10,000.

Cinemates, founded by Tatiana Mandis ’23, won the Fan Favorite award of the night, determined by a vote from the audience. When considering what being a part of the top seven teams meant to her, Tatiana said “I was so honored that Cinemates was one of the top seven ventures. The Brown Venture Prize Pitch Competition gave Cinemates invaluable exposure to Brown Alums and local founders and investors. My pitch gave me the opportunity to garner the attention of mentors who continue to provide valuable insight and guidance.” Rose Engler ’22, who presented for COAD, reflected on the experience stating that she was “super proud of (her) team and everything (they had) accomplished.” Yifei Wang ’23, who presented for Dream!n, said “I’m so excited (to win the prize),” reflecting on how his team practiced “hundreds of times” for their pitch. 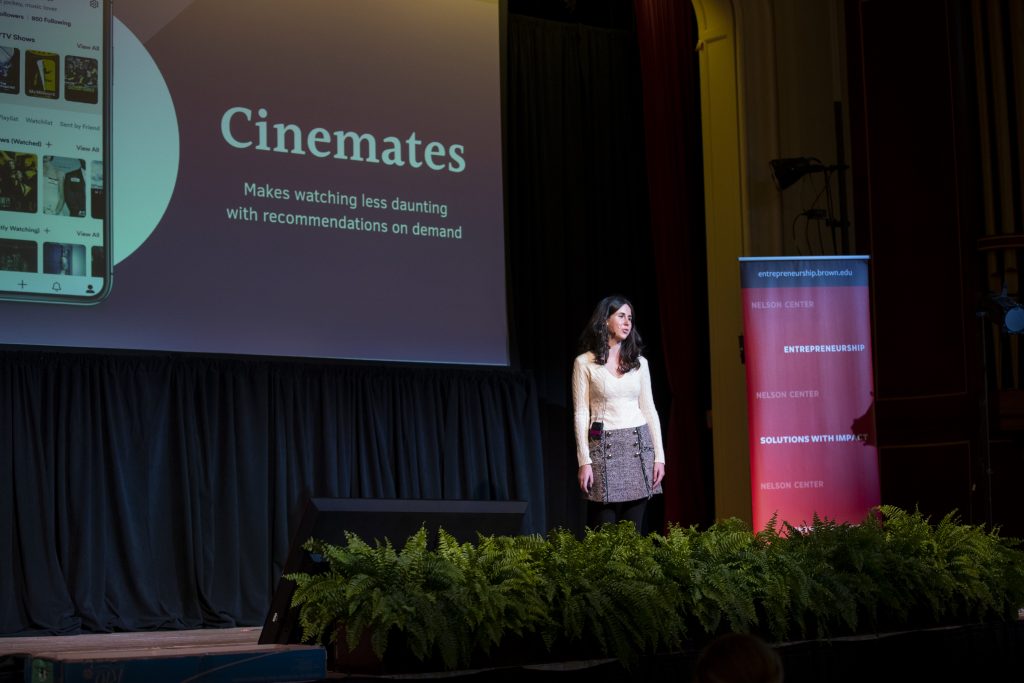 Overall, the night was a thrilling return of a beloved celebration among the Brown entrepreneurship community. Once the winners were announced, everyone gathered in the back of the room eager to reconnect after such a long period of mainly seeing one another virtually. One audience member Chinazo Onyema admitted that she originally “planned to stay for about 30 minutes or so because I had an assignment due but the show was too good to leave even a second early. I thought it was phenomenally executed and found all the pitches inspiring.” Chinazo further reflected on the event saying “Additionally, I thoroughly enjoyed watching my ex-classmates on the podium because I witnessed their growth from our online entrepreneurship class to the venture prize show. I can’t wait to attend next year’s venture prize and possibly be on the podium one day!”

It was a celebratory evening that once again revealed the bright future of entrepreneurship at Brown, fueled by the students’ innovation and the support of alums, faculty, staff, and friends. We look forward to next year as another chance to celebrate this growing entrepreneurship community at Brown and the work we are all doing to create more solutions with impact.

Recognition of the Nelson Center Staff is also in order. The event could not have been possible without the impressive organizational and planning skills of Liz Malone, Tori Gilbert, and Sheila Haggerty. Jonas Clark spent hours coaching students to develop the incredible pitches for each venture. Danny Warshay led the event with ease and served as an unwavering source of support for the Nelson Center team. Often the technological aspects of the event go unnoticed, but we could not have hosted such a successful event without the expertise of New England Showtime Productions Inc., Brown University Media Services team under the leadership of Giovanna Gastaldi, and the Office of Communications’ Events Management team.