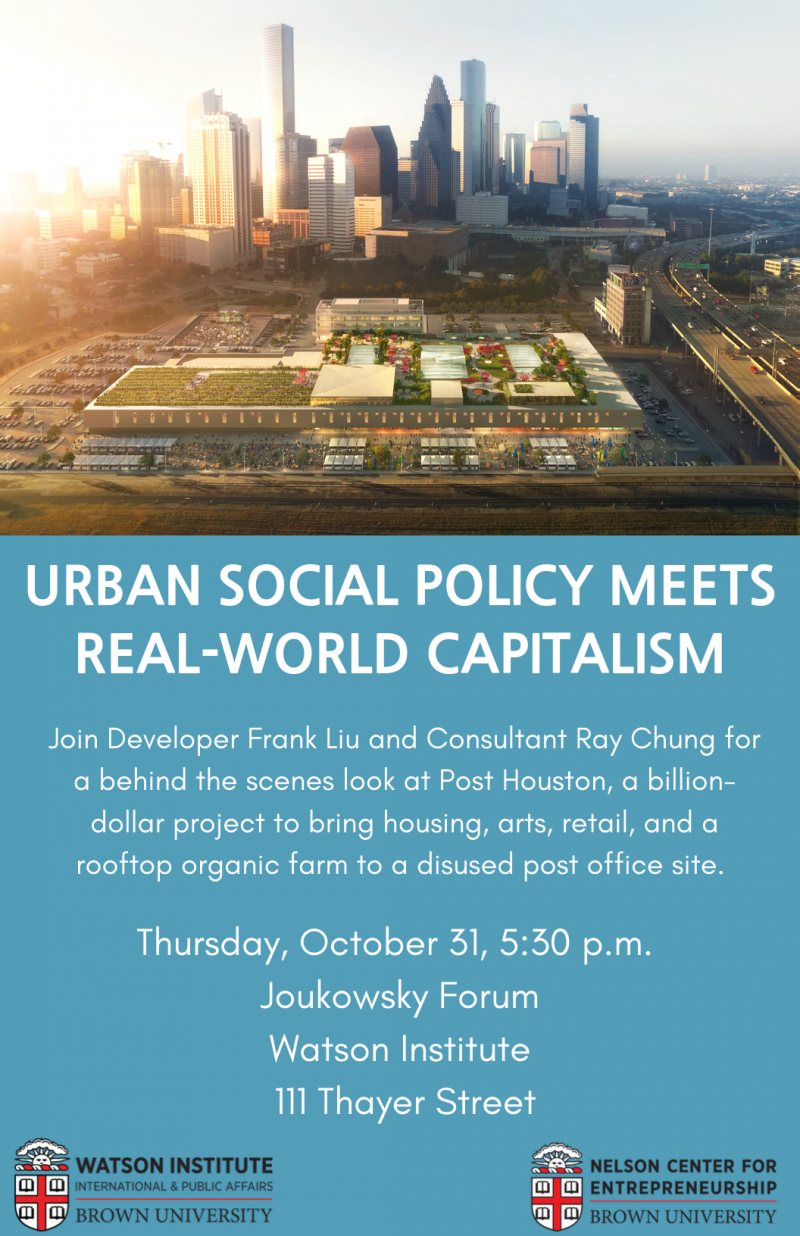 Developer Frank Liu reveals the business and financing strategy behind Post Houston, a billion-dollar project to bring housing, arts, retail, and a rooftop organic farm to a disused post office site. Liu will open his urban development policy playbook, a rare opportunity to see how a large-scale innovative development in a major city gets done.

Co-sponsored by the Watson Institute and the Nelson Center for Entrepreneurship.

Frank Liu is the owner and founder of Lovett Commercial, Lovett Homes, and InTown Homes. Liu was born in Taiwan and became a Chinese American – coming to the US in 1971 and residing in Houston since 1973. At the age of 3, he moved to Vietnam where Liu’s father took a position as a Textile Engineer. He lived there during the Tet Offensive, an historic event that would change many lives, including his own.

Liu’s family of companies began in 1980 when he and his college roommate started Lovett Homes, a premium‐quality urban residential development company based in Houston, Texas. In 1995, Frank began Lovett Commercial, a full‐service retail real estate firm specializing in urban and suburban development and redevelopment. In 2003, he founded InTown Homes, a home and townhome development company that delivers environmentally‐friendly designs within emerging neighborhoods.

Through his various companies, Frank has developed over $3 billion in projects throughout Texas, including retail, office, industrial projects and thousands of homes. He has also been a proud and active supporter, underwriter and board advisory member for the arts, education and community development organizations throughout the Houston area.

Prior to forming his own consulting services, Ray was employed by BakerRipley, a large Houston-based nonprofit human services organization, from which he retired in August 2017. He joined BakerRipley in 2005, as its Chief Financial Officer and was responsible for all the financial, budgeting, treasury and accounting operations of the organization. In 2013, Ray was appointed BakerRipley’s Senior Vice President and Chief Strategy Officer and was responsible for developing, communicating, executing and sustaining the Agency’s strategic initiatives. Under his leadership, BakerRipley secured three separate New Markets Tax Credit financing totaling $47 million, which enabled the organization to build two new community centers and its office headquarters.