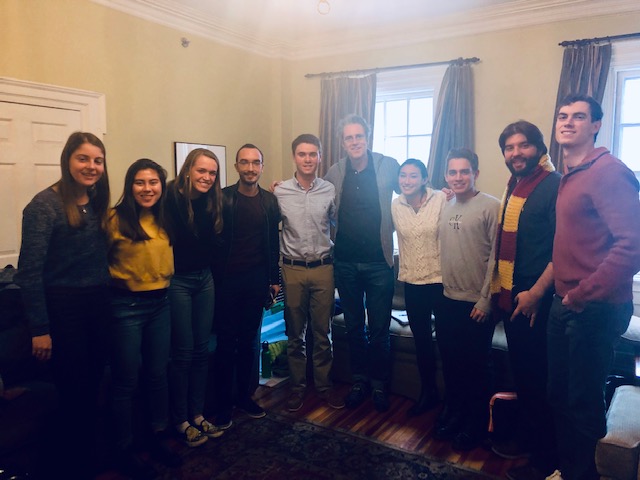 On November 15, 2018, The Nelson Center for Entrepreneurship and Brown EP hosted Rufus Griscom ’91, Founder of Babble.com and The Next Big Idea Club, for a roundtable discussion as part of the Roundtable Discussion Series moderated by Chuck Isgar ’20.5

Griscom, a serial internet entrepreneur, inspired students about the potential for rapid growth of an online platform, speaking from personal experience as the founder of Nerve.com and Babble, which he sold to Disney. Griscom provided actionable steps, timelines, and frameworks to use when creating ventures, building user bases on platforms, and exploring acquisitions. It was an insightful discussion that ended with an engaging think-tank about the future of literature and content delivery to students as it relates to Griscom’s current work with The Next Big Idea Club.

Starting a venture: think about the interests of others

Griscom’s start in entrepreneurship was not successful. As a matter of fact, Griscom admits that his first few entrepreneurial ventures were failures. In these initial ventures, he gained a key insight: his tastes were not shared by everyone. He realized that while an entrepreneur must be personally passionate and invested in their product, they must also be creating something that appeals to the interest of others.

Griscom shared a framework with the roundtable participants that he suggests entrepreneurs use to evaluate their ideas and ventures: think about a venture in terms of three overlapping circles of a venn diagram. These circles include the world’s interest, the entrepreneur’s interest, and proven opportunity to monetize. Griscom learned in his initial ventures that he was focusing too much on the “personal interest” circle, and not enough on the world’s interest. Over time, Griscom realized the importance of working in spaces where there is a validated market and need for the product.

With this framework in mind, Griscom launched Nerve.com, a smart website about sex and culture with his then girlfriend in 1997. Nerve quickly grew to several million unique users per month, which led to a tv show with HBO and book deal with Random House.

Applying learnings from one venture to inform the next

Griscom was in for an educational ride with Nerve. Nerve was launched before the dot com implosion in 2000. Ad revenue cratered overnight, and Griscom explains that it was “like a meteor hit.” Nerve survived by creating a paid content subscription and launching Nerve Personals.

The personals business accelerated quickly, so Griscom spun off the technology behind it as a separate company called Spring Street Networks, which eventually powered online dating for 100 companies including AOL, Sony Music, Salon and The Onion.

Both Nerve.com and Spring Street Networks continued as businesses and were eventually acquired, but in the meantime Griscom was looking for a business model with a better potential to grow. Having lived firsthand through the dot com bubble, the experienced entrepreneur in Griscom knew that he needed to create something where advertisers would want to get involved.

Griscom learned, over time, that it is best to assume that you won’t cause people to shift their mindsets and desires for certain products. Advertisers follow the interest of consumers, so it is in an entrepreneur’s best interest to carefully interpret the market and recognize what advertisers are interested in. Griscom realized that advertisers were interested in parents, so in 2007 he and his wife Alisa Volkman launched Babble, an online platform for top mom bloggers to share more honest, contemporary insights and advice about parenting. Over time, he and his wife grew the platform to 15 million unique users, leading to an eventual acquisition by Disney. In this process, he learned about what it takes to develop a following on a platform.

Building up the user base on a platform

Early on in your venture, Griscom suggested that you engage in conversations with friends and watch when their eyes light up. When their facial expressions demonstrate an interest in what you’re saying, that’s when you might know you’re onto something. Overall, you want to be pitching your idea as often as possible.

Once live and online, Griscom suggested doing AB testing to see what is resonating. Most companies have a special sauce. For example, Nerve’s secret sauce was garnering a lot of press. Griscom explained that discovering your audience can take a lot of trial and error, but it is very important. In the case of Babble, the platform generated a lot of buzz early on for being an irreverent, hipster parenting site. This market positioning helped Babble grow from zero to a couple million visitors per month. Eventually, it was time to transition Babble, so that it was more broadly appealing — now a more honest, contemporary website for a new generation of parents — and not just geared towards the “hipster” parents.

Babble leveraged Pinterest, an emerging platform at the time. Babble became the third most pinned site on Pinterest, which helped to drive traffic over to the platform.

Griscom recommended that entrepreneurs should think about who the three to five most likely acquirers are for your business. Then, he suggested you do research and discover who the stakeholders are within those companies. Finally, and importantly, seek those people out. Griscom suggested that you should try to set up coffee with the people you’ve identified. By doing so, you will establish trust with potential future acquirers, which is of vital importance.

When having coffee with potential future acquirers, Griscom suggested that you should be way too honest. Griscom explained that most large companies are focused on their current business and are not very interested in stealing your ideas.

Griscom emphasized to the participants that when working on a future partnership or acquisition, you obviously need the product, but you also need to have the human component. Your future partner or acquirer has to like you. Ultimately, for something to happen, someone from within the company will have to push you through. The best way for this to happen is to create connections very early on so that you have a strong relationship in the future.

By approaching potential acquirers or partners early, you can have conversations with no angle. Then, many months or years down the road, you will have established relationships that are not predicated on your request for anything. These longer-term relationships are almost certainly more valuable and effective than reaching out to a potential acquirer or partner as soon as you’re ready to sell or partner.

Be honest and realistic when speaking with potential investors or acquirers

Griscom outlined a few essential components that you should have when fundraising: a business thesis, traction, and an “adequately compelling story.” Nothing crazy novel there.

But then Griscom suggested something that you might not hear very often. He encouraged entrepreneurs to be completely honest when speaking with potential investors, and to even share what’s wrong with their product. He suggested that when making and presenting a pitch deck to a potential investor or acquirer, the entrepreneur should include a slide about the top three to five reasons why you shouldn’t invest. When Griscom sold Babble to Disney, he presented a slide with the top three reasons why Disney should not acquire Babble.

There’s a reason why Griscom suggests being honest with investors. Investors get excited when they see the entrepreneur(s) get excited. They obviously want to invest in ambitious people. But they are also looking for what is wrong with your business; they want to understand the obstacles, and if you provide this information you demonstrate that you are not only trustworthy but also savvy in the process of overcoming the obstacles.

Creating the Next Big Idea Club

Griscom discussed The Next Big Idea Club (NBIC), his current project where he is the CEO and co-founder. NBIC was created in a partnership with Malcolm Gladwell, Susan Cain, Daniel Pink, and Adam Grant. The core thesis behind NBIC is clear: not everyone loves reading or writing long books. Given that the book business is a $28 billion industry, Griscom sees the field as being ripe for disruption.

In creating NBIC, Griscom asked lots of writers what their biggest pain points were. Figuring out the industry was not easy, as Griscom and his team tried twelve different business models and spent over $2.5 million without finding any success.

Eventually, NBIC landed on a subscription model, where they select groups of books and distill them down to 20 minutes of audio, visual, and text for each book. Through NBIC, you can purchase a package that includes just the distilled versions, or the distilled versions as well as the hard copy versions of the book.

NBIC boasts lots of big executives as subscribers, such as Bill and Melinda Gates. NBIC is getting traction, and they are now exploring other platforms and means to get literature, or summarized versions of it, in the hands of interested customers, in particular students. NBIC’s investors include The New York Times, Comcast, Bloomberg, and Bertelsmann, which owns Penguin Random House, among other media companies and VCs.

Think tank: how do students feel about books? The future of literature and content delivery for students

While NBIC currently offers a student discount rate, Griscom wanted to take a deep dive with the entrepreneurial-minded students in the room about how NBIC can become more appealing to students. The discussion turned into a real think tank; Griscom was excited to get a variety of student’s takes on things, and the participants were enthusiastic to share their opinions.

The group discussed what would be engaging to students in terms of literature and means of delivery. Amongst ideas thrown around, students expressed an interest in hearing the actionable steps presented in books. Additionally, students showed interest in learning about the criticism of books, as well as the context and market for the book.

Some students expressed their interest in having books become more customized to them, or at the least having a framework for understanding how books can be more applicable to them. Participants seemed to be interested in having books referred to them by trustworthy sources, and authors within the NBIC, such as Malcolm Gladwell and Susan Cain, might be just the voices that students would like to hear.

It was also discussed what medium would work best to present content to students. Podcasts and email digests appeared to emerge as favorites amongst students. One thing was clear: students like things to be short. Participants expressed that a 20 minute summary/criticism of a book might be too long for the attention span of current students, even though the book might typically take several hours to read. While Griscom hopes you’ll consider subscribing to NBIC, he wanted all interested students to know that NBIC meetups are open to everyone.

A special offer for Brown students to join NBIC

Griscom would like to offer a rate of $9 per annual subscription to NBIC Express (which does not include the books, but does include all the e-course, podcast, and live video / community access), discounted from the normal rate of $89 per year (!!!!) for any group of three or more students who choose to get together to form their own Next Big Idea Club.

He is also happy to offer a student discount rate of $19 for NBIC Express for either personal subscriptions or gift. If you’re interested, email emily@nextbigideaclub.com, tell them you are a Brown student and she will set you up.