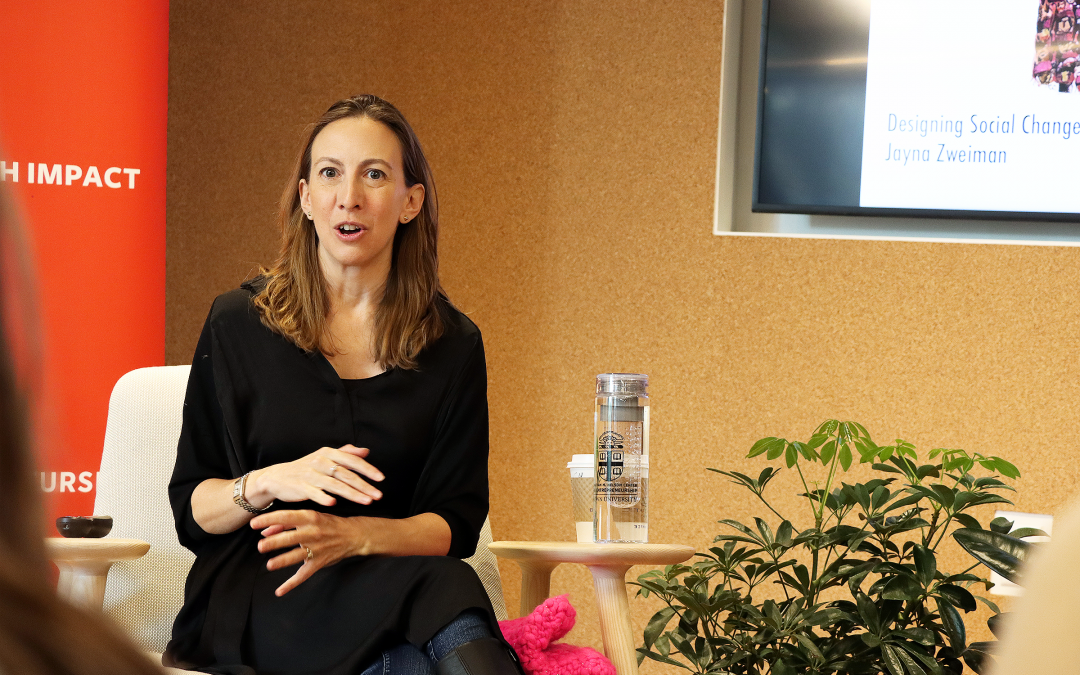 “From my own limitations comes inspiration.” Jayna Zweiman ’01 discusses interdisciplinary entrepreneurship through the Pussyhat Project and the Welcome Blanket Project at the Nelson Center’s Oct. 18 event, hosted for Family Weekend.

Jayna Zweiman ’01, co-founder of the Pussyhat Project and founder of the Welcome Blanket, joined Executive Director of the Nelson Center Danny Warshay ’87 in conversation on Oct. 18. The event was the first of two scheduled by the Nelson Center for the University’s annual Family Weekend, welcoming both alums and visiting family members to join our usual audience of students.

Reflecting on her time on College Hill and unique path as a young post-grad, Zweiman described herself as the “quintessential Brown student,” double concentrating in Economics and Visual Arts and even completing every pre-med requirement (save for physics, which she would have to revisit when applying to architecture school down the road). She went on to embark on a stint as a management consultant, attend architecture school at Harvard, do campaign and inauguration work for Bill Clinton’s reelection, work as a game designer at a startup, and eventually work full-time in architecture while also curating exhibitions about women in architecture and serving as a visiting professor of architecture for six months at the Monterrey Center for Higher Learning of Design in Mexico (CEDIM).

However, in 2013, Zweiman sustained a head injury that led to a long recovery process, putting her out of work for years until the start of the Pussyhat Project in 2016, her most recognizable work to date. She described the frustration of watching movements like Black Lives Matter gain traction in that time while being unable to support and participate in activism as fully as she’d like. This feeling, specifically in response to being unable to travel to the Women’s March happening in Washington, D.C. that January, drove Zweiman to begin brainstorming the Pussyhat Project with co-founder Krista Suh, whom she’d grown closer to through a knitting and crocheting group — a “healing modality” for Zweiman during her recovery.

Zweiman had two goals for the initiative: to create a large visual impact (greatly inspired by the 1987 AIDS Quilt, which was also displayed at the National Mall in D.C.) and to create an impactful distribution pattern where people could easily participate in the March despite barriers to access. It granted agency to those who might feel unable to contribute for a myriad of reasons, said Zweiman. The Pussyhat Project became a viral success, uniting people through social media and partnering with 175 local yarn stores across the country. The total duration of the project from launch to the Women’s March was 59 days.

Despite the virality of the initiative, Zweiman credits the project’s success with years of experience and thoughtful consideration, reflective of her interdisciplinary approach fostered at Brown. “The Pussyhat Project happened very, very fast, but I had been working on projects for a really long time,” Zweiman emphasized. “Even though this looks like some overnight boom … there had been years of testing different things.”

She discussed elements of the project she’d actually tinkered with across many roles and disciplines. The concept of knitting a hat and passing it on with a personal note to a stranger attending the March developed with the same approach Zweiman took to analyzing how text in art exhibitions becomes meaningful to viewers. Her time in consulting aided her consideration of distribution patterns. Above all, core concepts of architecture — “building something out of nothing” — aided Zweiman throughout the entrepreneurial process: How would the Pussyhat Project serve as an accessible point of activism for the Women’s March? Like architectural conceptions of extended time and space, the individual’s experience was not limited to the March: “It was all the time and space leading up to the March.”

As for what came after the Pussyhat Project, Zweiman once again found herself called to a creative, social entrepreneurial venture, in response to an urgent political climate. In 2017, she began the Welcome Blanket Project based on the proposed 2,000-mile-long wall along the Mexico/U.S. border. The distance of the proposed border wall was reimagined as 2,000 miles of yarn used to make individual “welcome blankets” for new refugees. Makers were also invited to share their own immigration, migration, and/or relocation story, “because we all have one.” The Welcome Blanket continues to thrive, moving well past 2,000 miles of yarn, as well as limitations Zweiman observed with the Pussyhat Project and has accounted for and integrated into recent work.

“Not all pussies are pink,” remarked Zweiman, speaking frankly of critiques of the Pussyhat later factored into Welcome Blanket development. “And not all women have pussies.” Furthermore, Zweiman characterized Welcome Blanket not as a single reactive moment, but potentially a “new American tradition,” laying the groundwork for a more pluralistic society.

During the Q&A portion of the event, two guests’ remarks did well to summarize what exactly makes Zweiman’s practice of entrepreneurship infused with artistry and social good so unique to witness. “I’m excited to hear about entrepreneurship that’s not an app,” said a visiting family guest from San Francisco, while a parent stated, “Everything Brown does seems more empathetic.”