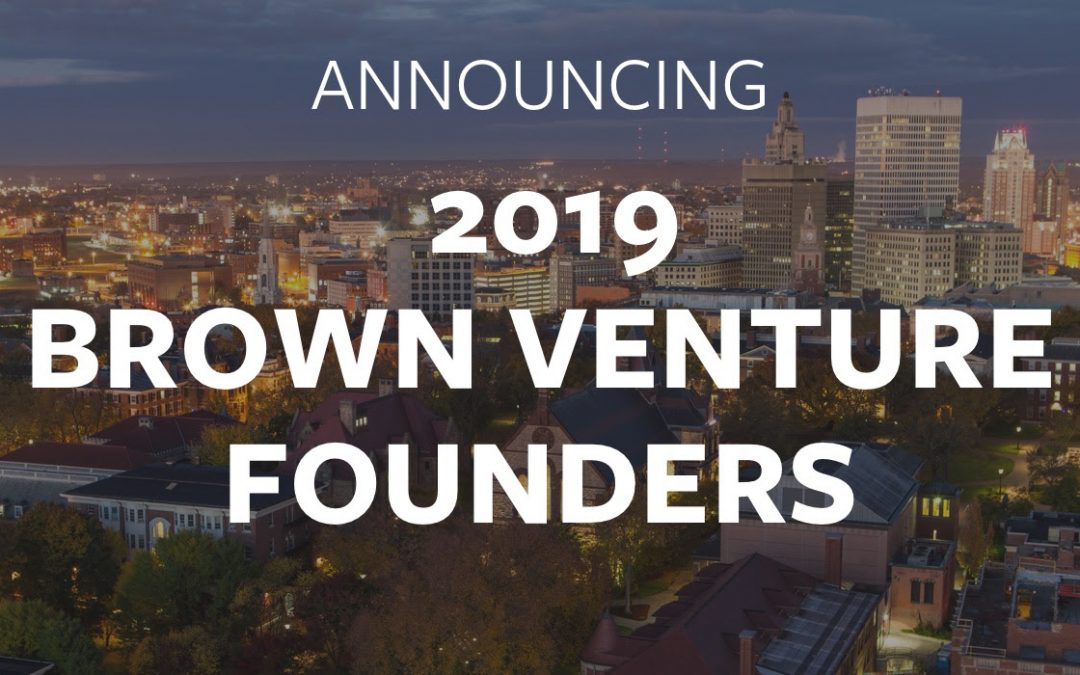 We are excited to announce the 2019 Brown Venture Founders, an award that motivates recent Brown graduates and young alumni entrepreneurs to launch and grow their startups in Rhode Island. A partnership between the Nelson Center for Entrepreneurship and the Slater Technology Fund, this initiative offers Brown startup founders grants of up to $50,000, dedicated mentorship, co-working space for their ventures, and other resources for growing their companies in Rhode Island. We are proud to announce that Kevin Eve ‘18, co-founder of Uproot, and Rishabh Singh ‘17, the founder of Gradly, have been named the 2019 Brown Venture Founders.

This award is part of Brown University’s strategic action plan: Brown and the Innovation Economy, spearheaded by Provost Richard M. Locke. In collaboration with community leaders and experts, the University is maximizing its impact on innovation, entrepreneurship, and job growth. The Nelson Center for Entrepreneurship, along with the Slater Technology Fund, are strategic partners in this effort. 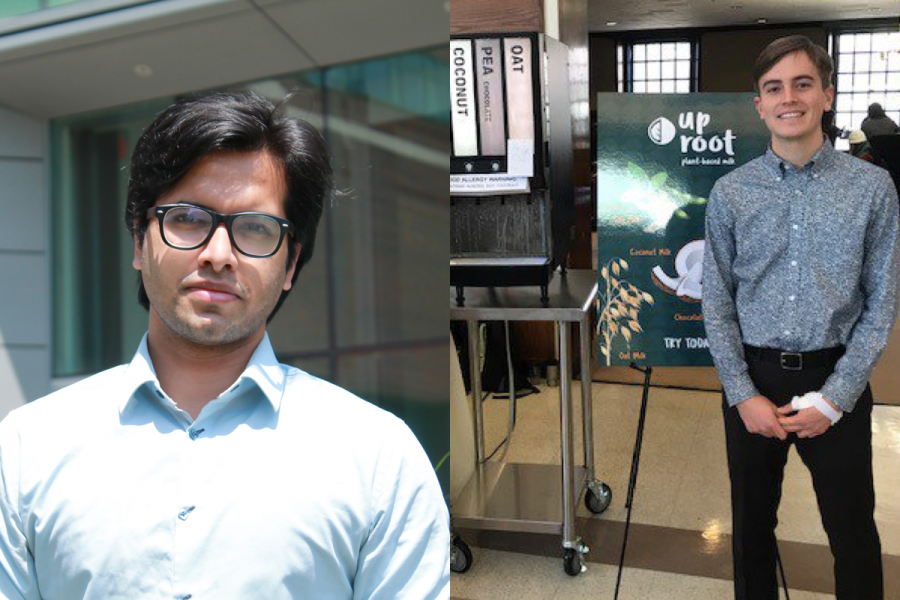 Meet Rishabh Singh ‘17, the founder of Gradly
Gradly, a software concierge service that assists international students moving to the US, was founded to solve the complications that Singh and millions of other international students experience when studying abroad. In effect, Gradly is digitizing the immigration and relocation process by working with banks, insurance companies, real estate firms & others so that their users don’t have to.

“The significance of Brown & the Nelson Center in my journey cannot be overstated: first, through a university scholarship that made it possible for me to attend Brown, to B-Lab where I worked on the first iteration of Gradly, and now, with Brown Venture Founders. Throughout, Brown and the Nelson Center’s support has been indispensable. As I work to expand Gradly, I am excited to continue to be a part of the Rhode Island tech ecosystem which, in my experience, has time and again proven to be uniquely positioned to support early-stage companies and emerging founders like me.”

Meet Kevin Eve ‘18, co-founder of Uproot
Uproot was founded to make healthy, sustainable plant-based milks accessible to everyone. Its first products allow cafeterias to efficiently serve a variety of plant-based milks from a single unit for the first time. The Brown Venture Founders resource will be instrumental in allowing Uproot to transition from a student venture idea into a sustainable startup.

“The Brown Venture Founder Prize has given me the support and confidence to launch Uproot in Rhode Island. The backing has been crucial as we scale production, build a team and seek investment. Launching an early stage venture has been an incredibly challenging and exciting experience. I am grateful to have the support of Brown University and the Slater Technology Fund.” Kevin and his co-founder Philip Mathieu ‘17 were participants in the 2018 Breakthrough Lab. They have now successfully launched in dining halls at Johnson & Wales University and Brown University, with more to come. 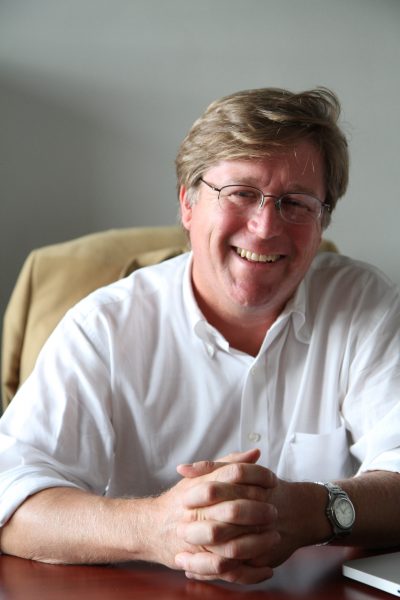 “Students in our universities will solve the great problems of our time – environmental, medical, societal,” said Thorne Sparkman (pictured to the left), managing director of the Slater Fund. “Through the Nelson Center, Brown University is at the forefront of preparing its students for these challenges with entrepreneurship courses, programs, and venture support resources. We are proud to work alongside the university to support its efforts. Through the Brown Venture Founders program and beyond, Slater is excited to invest in the next generation of Rhode Island’s entrepreneurial leaders emerging from Brown.”

There’s never been a better time to be an entrepreneur in Rhode Island! Innovation, inspiration, interconnectivity, investment—all are accelerating here, driven by a growing community committed to supporting the development of promising new ventures.

Join the Nelson Center for Entrepreneurship, Slater Technology Fund, and Venture Café Providence for a special sushi networking event to celebrate entrepreneurship in our state. 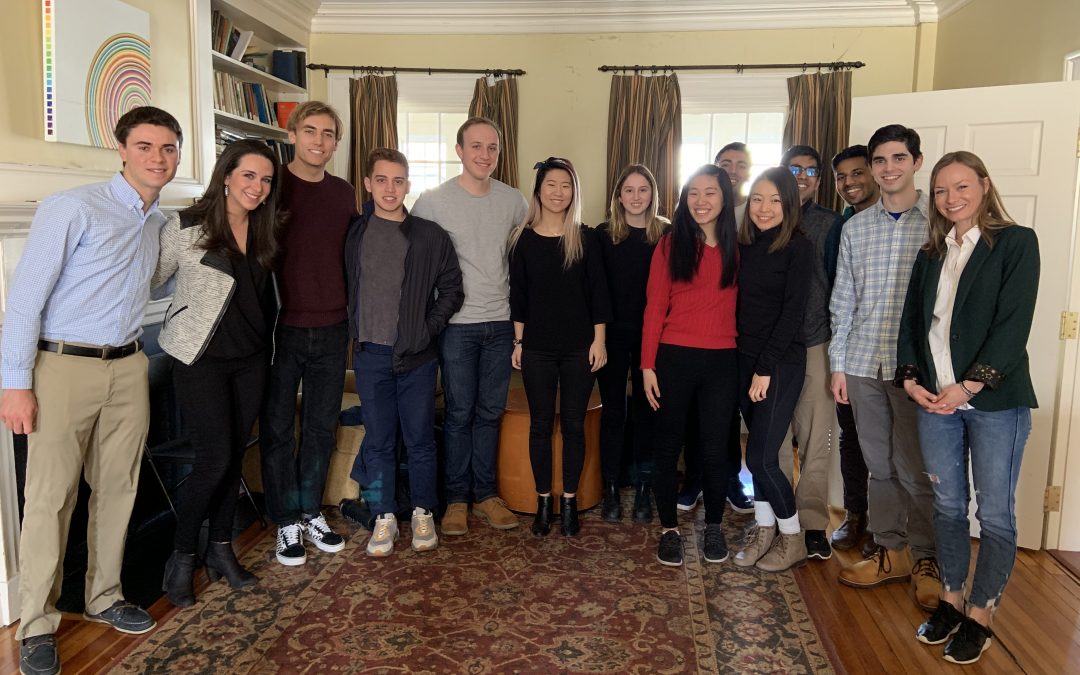 On March 6, 2019, The Nelson Center for Entrepreneurship and Brown EP proudly hosted Laura Thompson ‘09 for a roundtable discussion as part of the Roundtable Discussion Series moderated by Chuck Isgar ‘20.5. Thompson shared lessons learned through her journey leading the growth of Google X.

When Thompson first came to Brown, she thought she would concentrate in applied mathematics. She approached her time at Brown as a way to take engaging classes, and many of these courses lay in the realm of entrepreneurship. She ultimately graduated with a degree in public policy, but not before successfully launching Runa, a tea company with a social mission of providing opportunities for Amazonian farmers.

After doing some work in London with Google’s budding consumer electronics group, Thompson joined Google X, Google’s “moonshot factory”. Thompson was a unique addition to Google X as she represented an early non-engineering hire for the team. When she joined, there were four projects in the works under the Google X umbrella: one being self-driving cars. And you’re probably wondering about those other three? Well, as much of her work at Google X, it was secretive.

So, what was a public policy major doing as one of the few non-engineers on a team trying to solve complex technical problems, ranging from combating climate change to the future of robots? Thompson shared that the fact she wasn’t an engineer is actually what made her so valuable at Google X. For example, Thompson helped teams think about the human consequences of their work and what it would take for projects to land successfully in the real world.

Leading Google X through the years

There is a growing need in technology to prioritize human-centered design and Thompson is pleased to see this movement progressing. Along these lines, Thompson explained that they thought about sustainability at every level of the project and ideation process in her time at Google X.

The goal at Google X is to create a culture of innovation that leads to development of ideas for the future. At first, Google X thought that the way to achieve the most success would be to have everyone together. Over time, they realized that this model wasn’t sustainable. Thompson was part of the transformation from the ‘everyone-in-a-garage-mentality’ to a more sustainable model where each project gets spun off and has its own business model, while still being under the Google X umbrella.

To the budding venture capitalists in the room, Thompson shared a framework that they commonly utilized at Google X when deciding which new projects to undertake. For each potential project, they would make a list of all the reasons the project would be an epic failure. As the team worked on the project and overcame the challenges, they would cross them off the list. If a project could overcome one quarter of their challenges, the project would likely be a go, as the team had proven they have the ability to overcome the difficulties that will surely present themselves along the way.

Thompson explained another rule of thumb used at Google X when evaluating new projects: “is this going to affect one billion people in a meaningful way?” This message resonates closely with the Nelson Center for Entrepreneurship’s mantra: create solution with impact.

Despite the best intentions, many successful innovations come from random, happy experiments. It is for this reason that while they had rubrics in place, they also saw it was important to let teams run loose.

The innovators in the room were curious to get Thompson’s thoughts on what’s next in terms of innovative technology. Thompson explained that, for one, it is good to see a growing skepticism surrounding technology. She is excited that the next generation appears to be focused on technology being good for humanity.

Thompson thinks there are opportunities for disruption in the fields of personal finance, logistics of shipping and transportation, and sustainability. And her personal favorite, dog-related startups, too.

As the discussion neared an end, Thompson left students with some words of wisdom: “you’re only going to be great at something if you’re excited about it.” Along these lines, Thompson stressed the importance of pursuing things you’re excited about with people you respect and who you have shared values with and enjoy working with.

During Fall 2018, Rhymes with Reason was featured with Bloomberg’s Social Media Content Outlet “Tic-Toc.” The feature visits Rhymes with Reason CEO and founder, Austin Martin ‘17 at a school where the program is in use—Hackensack High School in New Jersey. Watch the video here.

Rhymes is presently working on adding more extensive (and current) content for Fall 2019, including brand new vocabulary enrichment exercises, teacher instructional materials and more with the help of their team of School of Education Harvard Graduates.

Rhymes is also slated for use in new cities for the 2019 school year, and are working on International expansion. Hip-Hop and American pop music is a firmly established global phenomenon, and it is growing every day. What better way to participate in this growth than to allow it to be used as a mechanism for learning! Learn more here.

Thank you to everyone who attended the 2nd annual Brown Venture Prize pitch night! It was completely sold out with 250+ in attendance, and many alumni and friends of the center watched remotely from around the world. Congratulations to the 8 finalists who pitched their ideas to 7 alumni judges. The ventures ranged from a mobile technology to fight addiction, to an app that provides on-demand in-home care for the elderly and disabled. If you missed the event, we will soon share a link to the recording on our YouTube channel. 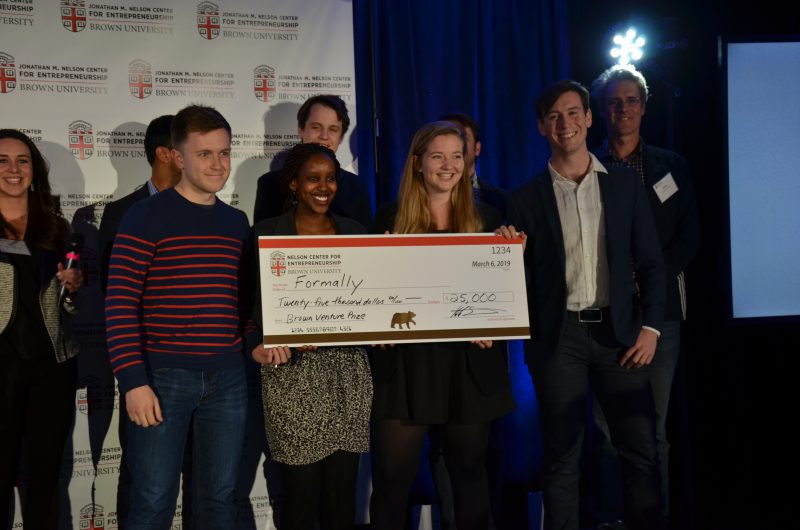 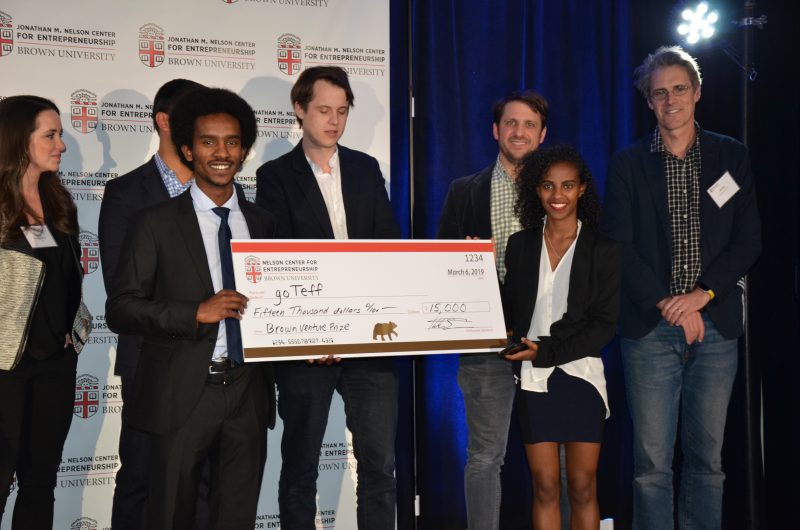 goTeff is a mission-driven nutrition brand using teff grain
—a superfood from Ethiopia, with a vision to provide superior nutrition to
US consumers while empowering Ethiopian small-holder farmer 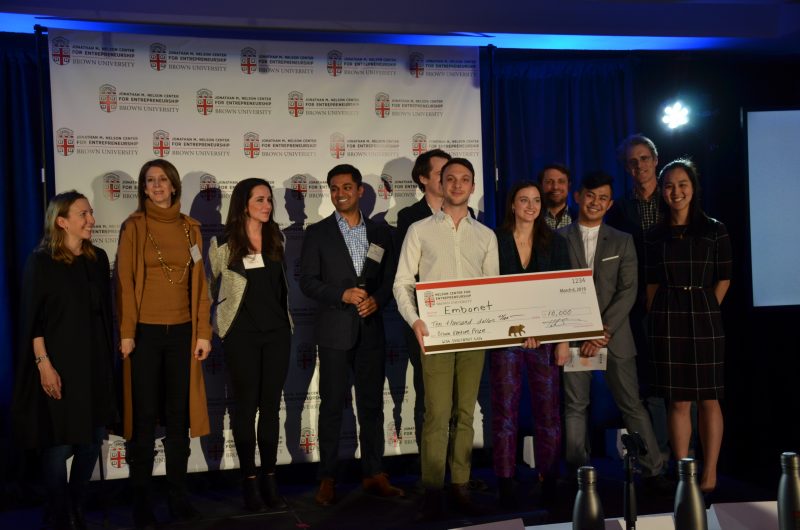 Thank you to our alumni judges!

The Brown Venture Prize is possible thanks to the co-founders of Casper, Neil Parikh ’11 and Luke Sherwin ’12. Because of their generous gift, we can continue supporting and empowering students to create solutions with impact and make their ventures a reality.

Ben Chesler ’15, Chief Innovation Officer of Imperfect Produce and Heidi Messer ’92, co-founder of Collective[i] were unable to attend the night of, but were instrumental in the selection of the top 8 and mentoring these students. 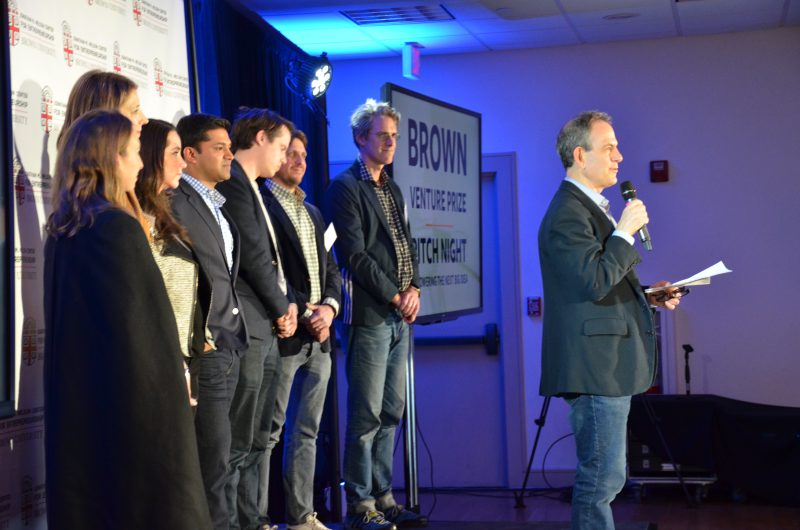